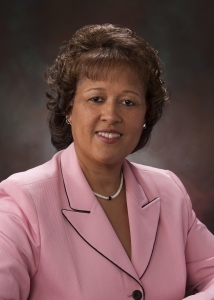 Helen Howell is the adviser of Martinsville/Henry County NSBE Jr. Chapter and has served as a Career and Technical Education instructor for the Martinsville City Public Schools for 42 years. In her two decades working with the NSBE Jr. chapter, she has fervently pursued and obtained opportunities for the chapter’s students to gain more exposure to STEM and more experience in leadership.

“I am humbled to accept the award on behalf of the entire Martinsville and Henry County Chapter,” said Helen Howell. “Thank you to Bailey Stanley for nominating me as well as New College Institute for housing our program, Patrick Henry Community College, Virginia Tech and NC A&T State University for programmatic support; and students, parents, board members, and the Martinsville Community for your unceasing support. Without you, this award would not have been achieved.”

The Martinsville/Henry County National Society of Black Engineers Chapter was chartered in 1999 and was the first NSBE Jr. chapter to be established and chartered in Virginia. The chapter has a 100 percent graduation rate from high school, and every student member has either enrolled in college or enlisted in the military. The organization has become an integral part of local academic programming. Additionally, the Martinsville/Henry County NSBE Jr. organization has inspired many parents to return to school and pursue or complete academic degrees.

“NCI has the privilege of providing space for the NSBE Jr. chapter,” said Karen Jackson, interim director, New College Institute. “We share Helen Howell and the chapter’s goal of supporting students to explore a range of potential career paths and ensure they can reach their full potential.”

The Golden Torch Awards were given during NSBE’s Annual Convention, this year held virtually from August 19-22. Marvin Taylor, a parent of one of the NSBE Jr. members, accepted the award on behalf of the chapter.

NSBE is the premier organization serving African Americans in engineering and technology. As a technical community service association, NSBE is the link between the African American community and the world of technology. NSBE’s mission is to increase the number of culturally responsible Black engineers who excel academically, succeed professionally and positively impact the community.

All Martinsville Kindergarten Students to Receive a Free Book From New College...
Scroll to top

This site uses cookies. By continuing to browse the site, you are agreeing to our use of cookies.

We may request cookies to be set on your device. We use cookies to let us know when you visit our websites, how you interact with us, to enrich your user experience, and to customize your relationship with our website.

Click on the different category headings to find out more. You can also change some of your preferences. Note that blocking some types of cookies may impact your experience on our websites and the services we are able to offer.

These cookies are strictly necessary to provide you with services available through our website and to use some of its features.

Because these cookies are strictly necessary to deliver the website, refuseing them will have impact how our site functions. You always can block or delete cookies by changing your browser settings and force blocking all cookies on this website. But this will always prompt you to accept/refuse cookies when revisiting our site.

We fully respect if you want to refuse cookies but to avoid asking you again and again kindly allow us to store a cookie for that. You are free to opt out any time or opt in for other cookies to get a better experience. If you refuse cookies we will remove all set cookies in our domain.

We provide you with a list of stored cookies on your computer in our domain so you can check what we stored. Due to security reasons we are not able to show or modify cookies from other domains. You can check these in your browser security settings.

We also use different external services like Google Webfonts, Google Maps, and external Video providers. Since these providers may collect personal data like your IP address we allow you to block them here. Please be aware that this might heavily reduce the functionality and appearance of our site. Changes will take effect once you reload the page.